​Hello
I can state, without any doubt whatsoever, that this area is one of the most active in the world!  Having 3 encounters from 1982 until Feb 2018.  It is an issue I can not let go of, even when all family and most friends think I am wrong.  But this is typical because I am the only one in the woods.

Columbiana county has always been a hotbed of activity as it is the pathway from Salt Fork to so many areas.  I was a witness for troopers years ago when I had close encounter that led to several more after I decided to track on my own as a teenager.  Now, I believe that due to all the 'Ohio Grassman' coverage, they are moving north much more.  From Lisbon to Berlin lake, now it seems; to my backyard.

Ok, I've done some serious soul searching before I wrote this -  I'm not looking for anything, and I'm writing this just for my own therapy.

First- I was part of a fairly long and intense 'mystery' investigation back in the mid 80's when I was with friends camping in the woods outside of Columbiana - the loudest and most powerful screams any of us had ever heard, then our camp destroyed, local animals killed, etc..  So, I knew they are in this area.

I hunt some family property in Carrollton, and have seen a few large nests near my deer blind which was destroyed shortly after.

Here's my Story of Feb 2018, the last day of archery season.
The last day of this past deer archery season (about 3 weeks ago) I was hunting a friends property outside of Lisbon, near a massive network of strip pits and highwalls, and had seen no evidence, but had disregarded a few 'black glimpses'.

This was the last day so I decided to set up right off a main deer trail, on the ground between a few pines with a small pine patch to my back.  After a few hours of not moving a muscle, I knew something was walking behind me but I did not move because I thought it was a deer and I couldn't shoot my crossbow in the direction behind me, so I kept still. Then, after something VERY close started moving behind me and the hair on my neck standing up, I heard a very low and ominous grawl, and because it was nothing that could be in the woods, I actually decided it was my stomach....Until I heard it a second time, and the same time rocks started hitting the ground in front of me.  Well, that was it, I swung around and nothing there.  So, I blew it off since it didn't compute, and went to the edge of the pines and got behind a wood pile because there was only 45 minutes of daylight left.

As soon as I got down, 3 deer started to come towards me and I had cover to get into a good shooting position and actually got my red dot on my target.  The deer then, for lack of a better word, freaked out at something beside them; they were running and all directions in and out of the woods (there were cut hayfields between the strips of woods), and then disappeared.  I have watched these 3 deer go this route a half dozen times and the never acted this way.  So, I got up and started towards my 4 wheeler.

While I was walking the edge of a field and woods, another deer came out of the woods right across to my right, headed towards me.  Again, I was ready to shoot when this deer started running back and forth snorting constantly. And when I looked up I then knew what was going on.  There was a large Sasquatch marker in front of me, straight branches and logs arranged through and around a tree, and the  tree beside it was snapped off about 9 feet up.  ALL the other trees that were damaged or bent over were in the opposite direction so I knew it was part of the marker.  As I stood there taking pictures, I heard then saw a MASSIVE tree (90 to 100 ft) in the woods about 50 yards across the field to my 9 o'clock, shaking violently, followed by the loudest tree breaking (with a preceding grunt) sound I had EVER heard. It was unbelievably mind blowing loud!!  And I knew I was the focus of his anger, so I pulled out my 9mm and chambered a round because I thought he was going to charge me next.  After I settled down a bit, I made a video recording of my thoughts of what had just happened.  Then, I got on my 4 wheeler, drove towards all the edge of the woods where the tree fell and sat there with my brights on, but I was unable to see any movement.

What really keeps this popping up in my mind were the growls, I mean these were deep, soft yet incredibly powerful rumbling, growls.  Was he standing behind me?  I would have sworn that a curious young deer was sniffing my back right before hearing it.  Anyway, that's what happened and I needed to share with someone.

Thank you, especially for bringing such a tough subject into more light.

P.S.  I do have the video I recorded of myself talking about what had just happened a few moments earlier.

I know it's been over a year since I sent you my encounter and I have found the video....In my original story, you're always careful what you say, especially if you want to maintain your credibility, but I did see "it" shaking that massive tree, put a shoulder into it and grunt as it pushed over a living 100ft tree!!  Also, the people who own the property use to raise horses and told me a story about how their prize stallion/stud fell off a high-wall right behind the house, said it was running from a black bear!  Not it all makes sense, there was no black bear that caused a 1200lb horse to jump 100ft to it's death - especially when they only saw something "black" in the woods above it.

I'm attaching a few pics from that day, I have to send you a link to the video due to size
Thank you!


I have not been back to the area; first because I didn't want to go, not due to fear - which I had - but because I know they can be aggressive (or rabid, not sure, but I've heard of deadly encounters), possibly due to inbreeding, and because I am a firm believer in protecting myself, especially due to my handicap, and I didn't want to kill this thing.  It seems whenever one goes down, no matter who you call the government  shows up, so it's been impossible to get on into the hands of science.  I then had a massive surgery on my lower back and after 2 great months of recovery, I woke up one morning in the worst pain of my life and it hasn't changed in 3 weeks.  So, I am anxious to get there, I just physically can't do it.

As you'll see in the video:  I just witnessed the most absolutely & unbelievable behavior I have ever seen in, first a group of 3 deer on the normal route, and then a 4th that came out of nowhere.  Then I walked directly into the 'Bigfoot compass / marker' if you will, and then heard a loud growl while this massive tree was pushed side to side then then snapped over.  It was absolutely stunning!  Apologies for the video, haven't has time to edit it upright, since it was on my phone.

As for the pics, the 'marker' has a tree directly beside it, and it's 'snapped' off at around 9 ft.  This is no coincidence, as there's always a direction or territory marker beside the compass or map locator.  ALL the other trees on that hillside were slumped down towards the bottom - all but this one.  I also know that he was miffed at me for interrupting his hunt, it was truly amazing to sit there (on the ground - not up in a stand) while you know something is behind you and not moving because you think it's a deer.  Then the growls - I have heard the screams, which cannot be duplicated or matched die to the sheer power, but the growls were SO low!  It wasn't until the 2nd growl that made me aware of what it was - but it was probably 20 to 30 feet behind me and to growl like that, which to him was probably a whispers, but it resonated and vibrated my insides. 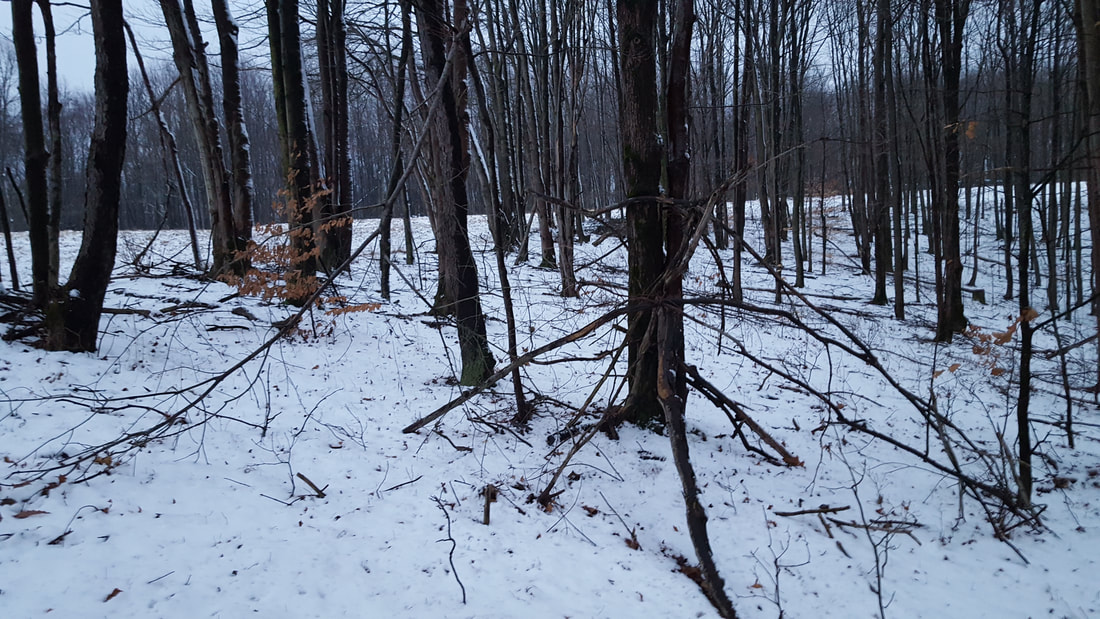